Okay, before you get all worked up, no, it wasn’t me. I have crossed part of the Empty Quarters, but by car.

British explorer Mark Evans, on the other hand, crossed the vast desert on foot, and lived to tell the tale through an exhibition at Oman’s National Museum.

I was lucky enough to meet him for a brilliant, fascinating and inspiring presentation.

Bertrand Thomas and the Last Frontier

The first recorded trip across the vast sand dunes of the Empty Quarter – Rub’ al Khali – travelling from Salalah in the southwest corners of Oman through the sands of Saudi Arabia towards Qatar in the Arab Gulf, was completed by Bertrand Thomas in 1930. At the time, the Empty Quarters was seen as ‘the last frontier’ of expeditions – everything else had already been done.

Thomas came from a humble background, but joined the Army and was posted to Iraq where he met Gertrude Bell as well as other influential Arabia scholars. Eventually, Thomas was posted to Muscat as the wazir, advising Sultan Taimur in financial matters. While in Muscat, he planned and prepared for crossing the great sands and in 1930, he succeeded with the help of Salalah Sheikh Saleh bin Kalut.

Bin Kalut has not received much international nor formal recognition for his role, but it is clear that without his help, Thomas would not have managed his feat. In Salalah, Bin Kalut is known by word of mouth and through local oral history traditions.

In 2015, 85 years later, British explorer Mark Evans decided to attempt a repeat crossing, in the footsteps of Thomas. Evans was joined by Omanis Amour al Wahaibi and Mohammed al Zadjali, both knowledgeable about life in the desert.

Amour Al-Wahaibi, 38, is both part of and at one with the desert. Born in a small Bedouin community in the northern end of the Sharqiya Sands in Oman, he still lives in the same area, where he has raised his seven children, many of whom now help him with his work as a desert guide.

Mohammed Al-Zadjali is 32 years old, and comes from Al Musanah, near Muscat in Oman. He is training manager at Outward Bound Oman/Tahaddi, an organisation whose mission is to ‘help people discover and develop their potential to care for themselves, others, and the world around them through challenging experiences in unfamiliar, outdoor settings.’ Mohammed spends much of his time instructing and leading groups of young people as well as corporate groups. Through challenging outdoor journeys they develop key leadership and communication skills. 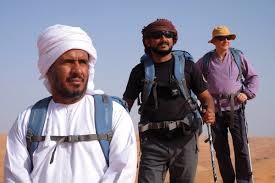 Mark Evans’ desert crossing would not have been possible without Amour and Mohammed, and in the aftermath of the expedition, both Omanis have been held up as role models for Omani youth.

Facing Challenges – Then and Now

In 1930, the greatest challenges the explorers faced were access to water and fighting. In 2015, permission to cross Saudi Arabia’s borders had been added to the list of hurdles. Evans knew there was little point in asking for Saudi permission first as it would likely be denied, so he enlisted the support of powerful allies before approaching Riyadh.

His Majesty Sultan Qaboos personally endorsed the trip as part of Oman’s 45th National Day celebrations. His Majesty the Emir of Qatar was happy to grant his permission. Prince Charles, a long-term admirer of Arabia, agreed to act as patron to the journey. Presented with this impressive show of goodwill, Saudi Arabia’s Minister of Foreign Affairs granted verbal permission for the expedition to proceed through the Kingdom of Saudi Arabia – in sha’ Allah.

Once the Saudi permit was granted, the team’s main challenge was access to water. With modern developments, the desert has changed. Traditional waterholes have dried out because the beduins move closer to towns on the fringes of the desert, so alternatives to wells en route had to be found.

Not only the desert has changed. Apparently, also camels have become modernized since Thomas’ times. Despite having access to top notch camels from the Royal Cavalry worth upward of 15000 RO per animal, Evans described modern day camels as ‘softer’ and in need of some toughening up. The camels, soft though they may be, were able to walk at a pace of 6.5 km/h and carry enough water and food for two days’ survival. They were essential to the success of the expedition; as were the two trucks carrying water, 50 days worth of food, 140 liters of fuel and a satellite phone.

From Oman, Through Saudi Arabia and Finally Into Qatar

One of the things Evans had not expected, was how word spread about their expedition. In Salalah, they were sent off with all the pomp and celebration a royally endorsed expedition needs, and as they proceeded on their journey, people came from near and far to greet them, host them, feed them and entertain them. By the 14th day, they had met with over 1000 people, including Oman’s ambassador to Kazakhstan, home on leave. By the end of the journey, 28 goats, seven camels and three sheep had been cooked in their honor.

Approaching the Saudi-Oman border, Evans and his team grew nervous. They still only had a verbal agreement to cross the border, and while it doesn’t look like much, that strip of land is guarded by heavily armed personnel.

However, at the last Omani border post, Evans and his team found that not only had the permit come through but the border post staff knew, and were eagerly anticipating their arrival. On the Saudi side of the border, they were met with enthusiasm by Saudi border patrol staff as well as by Sheikh Mubarak bin Kalut, the grandson of Sheikh Saleh bin Kalut. Sheikh Mubarak works for the Saudi border patrol, and had come to help them navigate through the most difficult part of the journey.

After 47 challenging days, coping with exhaustion, sand storms, blisters, sore eyes and cranky camels, but also watching glorious sunsets and experiencing the utter calmness and quietness of the sands, Evans and his team reached Doha in Qatar. 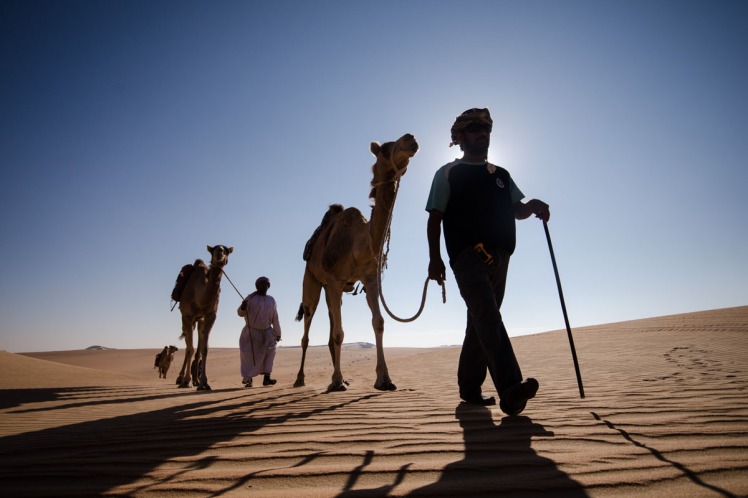 The Green Arabia project at Oxford University looks for evidence of human habitation in the desert. GPS coordinates were used to log every place human remains or artifacts were found, and will go into a database.

NASA benefited from the expedition’s ability to log data on the psychology of surviving in an extreme environment. These data will be used to prepare for potential human survival on Mars.

Inspiration to Move some Personal Boundaries

One of my favorite little stories came towards the end of my tour with Mark, telling the tale of the gift presented to Prince Charles on completion of the expedition.

Finding appropriate gifts, that dreaded family task that so often befalls me, is hard enough, but what on earth do you gift a Prince? Of course, desert socks made from knitted goats wool! Amer al Wahaibi’s wife knitted these lovely socks for Prince Charles, to keep his feet safe, warm and relatively sand free should he ever decide to visit the desert. Amer presented Prince Charles with the socks, in a yellow and green Al Fair plastic bag, sand still draining out.

Perhaps that’s the way it should be – in life, as in the desert, we are all equals.

I left the tour of Mark Evans’ Desert Crossing feeling a little awestruck. Venturing extremely far out of one’s comfort zone like these expedition members did may not be for everyone but trying something new once in a while, testing the boundaries of our imagination and experience, is surely something to strive for?

Unless otherwise stated, all images are borrowed from Geographical Magazine and belong to expedition photographers Sim Davis and John C. Smith.

This site uses Akismet to reduce spam. Learn how your comment data is processed.

This website is run by an expat living in the Sultanate of Oman. I write about life in Oman, while remaining non-political, non-religious and staying within the laws of the Sultanate.